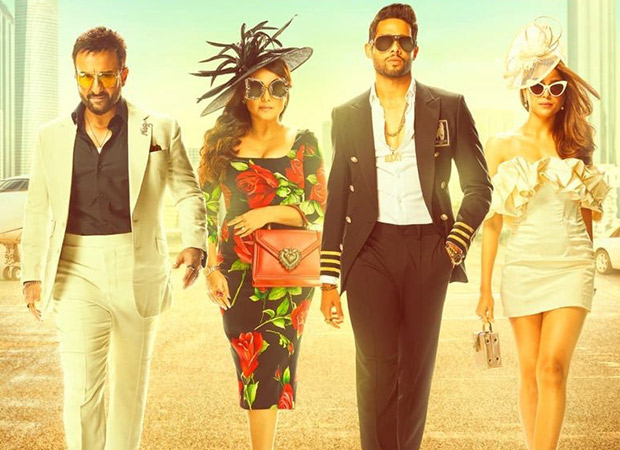 BUNTY AUR BABLI 2 is the story of two pairs of conmen. 15 years after the events of the first film, Rakesh (Saif Ali Khan) and Vimmi (Rani Mukerji) are now settled in Phursatganj. They have a son, Pappu, and have completely left the con job. One day, Inspector Jatayu Singh (Pankaj Tripathi) arrests them for conning a group of middle aged men. They were promised a trip to a country called Virgin Island and each person in the group had paid Rs. 5 lakhs to a couple – Kunal Singh (Siddhant Chaturvedi) and Sonia Rawat (Sharvari). When these men reached the airport, they realised that had  been conned. These angry men barge into the office of Kunal and Sonia only to find the logo of Bunty and Babli. Jatayu was a junior cop in the team of Dashrath Singh (Amitabh Bachchan) who was in charge of solving the Bunty and Babli case. Hence, he knew about their whereabouts and nabbed them. Rakesh and Vimmi insist that they are innocent. But Jatayu refuses to believe them. He realises his mistake when Kunal and Sonia carry out another con job while Rakesh and Vimmi are in custody. This time, they fool a mayor (Yashpal Sharma) of a town in western Uttar Pradesh under the pretext of selling the lease of the Ganga river. Jatayu makes an offer to Rakesh and Vimmi. He asks for their help in nabbing the new Bunty and Babli. Rakesh and Vimmi agree as they are hurt that someone is using their brand which they created with lot of hard work. What happens next forms the rest of the film.

Varun V Sharma’s screenplay is decent in the first half. The con games played by Kunal and Sonia before the intermission are at least interesting to see. But in the second half, the film goes downhill as the humour and logic both go out of the window. It seemed like the writer ran out of ideas and didn’t know what to do next. Varun V Sharma’s dialogues adds to the laughs at select places but could have been much better.

Varun V Sharma’s direction is neat and devoid of complications. But it fails to hide the glaring loopholes and not so funny developments of the second half. The biggest grouse however is how things happen conveniently. For instance, it is bewildering how Rakesh and Vimmi are able to locate Bunty and Babli in Goa. Even in the first half, Vimmi finds out about Sonia’s whereabouts in the gym. One can argue that their son, who is tech savvy, must have helped them. But how exactly he did so is never explained. And if he had the resources to track such most wanted criminals, then the police should also ideally have better ways of doing the same. And that’s not all. The character of the kid is very funny but the way Rakesh and Vimmi would leave him for days without help from anyone else is very unconvincing. And there are a series of such errors in the script.

BUNTY AUR BABLI 2 has a fine start. The three con jobs shown in the first half keep viewers engaged. The entry of Jatayu is heroic and funny. Post interval, one expects fireworks as Rakesh and Vimmi travel to Abu Dhabi to nab the con duo. But the plot points from here on fail to entice. The ending is intended to be wicked but is silly and also predictable.

Speaking of performances, Saif Ali Khan is not in a great form. And its pretty shocking since he’s known to ace in all kinds of genres. Rani Mukerji is too loud and over the top and is not in sync with her character in the first half. The only scene where she does well is when she blasts Kunal and Sonia at the breakfast area and it is memorable only because of her act. Siddhant Chaturvedi leaves a mark and proves that he’s a hero material. Sharvari makes a confident debut and looks sizzling. The performances of both, however, suffers as not enough emphasis is given on their respective back stories. Pankaj Tripathi, as expected, is dependable and hilarious. Yashpal Sharma is decent while late Mohit Baghel (Golu Chaubey) leaves a mark in the scene where he apologizes to Sonia. Gopal Dutt (Nand Kishor) is lovely. Rajiv Gupta (Gupta; cop) is passable. Neeraj Sood (Chadha), Asrani (Thahrey Singh), Brijendra Kala (Mehmood) and Prem Chopra get no scope. Agrim Mittal (Pappu Trivedi) and Mahi Soni (Rinku Awasthi) are cute but the character of the former could have been better fleshed out.

Shankar-Ehsaan-Loy’s music is poor and that’s another major problem with the film, since the soundtrack of part 1 is memorable even today. The title song is nothing special. ‘Tattoo Waaliye’ is played in the end credits and is forgettable. The same goes for ‘Luv Ju’ and ‘Dhik Chik’. Julius Packiam’s background score is much better.

Gavemic U Ary’s cinematography adds to the grandeur and visual appeal. Rajat Poddat’s production design is decent. Sabyasachi Mukherjee’s costumes for Rani Mukerji are tacky and doesn’t contribute to the humour. It also looks a bit cheap at some places. Leepakshi Ellawadi’s costumes for the rest are fine. Parvez Sheikh’s action is fine. Aarif Sheikh’s editing could have been slicker in the second half.

On the whole, BUNTY AUR BABLI 2 is a poor show all the way. At the box office, the overall collections would be impacted due to the negative word of mouth. Disappointing!